The store will not work correctly in the case when cookies are disabled.

Chat with our experts

Trading for over 15 years

The Best LED T8 tubes and how to retrofit them

In this guide you will find the best LED tubes for your needs, how to retrofit, the kinds of savings you will make with LED and an extensive FAQs list.

Kelvin is a unit measurement for the colour temperature of light, and is used to determine the shade of white rendered by LEDs. Most LED tubes start at approximately 2700k up to 6500k.

Warm white is generally reserved for areas wanting a more yellow light such as living rooms and homely areas.

Cool white and daylight are often used in workplaces such as factories and offices. This is because studies have shown higher levels of kelvins improve alertness and concentration.

*Savings are based on one tube being on for 10 hours a day with an electricity cost of £0.12 per KW

At Lamp Shop Online, we stock a range of LED T8 tubes designed for retrofitting into lamps previously used for fluorescent lights.

Fluorescent lights rely on ballasts in order to operate. Ballasts are designed to create a high-voltage burst to get the fluorescent light started and then regulate the power that comes into the tube. LED needs none of this and instead uses a driver, rendering the ballasts useless. These ballasts can cause issues when trying to fit an LED tube.

Lamp Shop Online stocks a range of direct retrofitting tubes, which completely cut out the ballasts.

With our tubes, you can wire the sockets directly to the line voltage and simply remove or bypass the ballasts.

We use single-end wired tubes—one socket end has the line voltage and the other holds the lights in place.

There is a lot of confusion are what battens are. You will see multiple articles comparing fluorescent lights vs LED battens around the internet. However, this is making the assumption that LED battens are a light source themselves.

Battens are simply a type of fixture that houses tubes, both fluorescent and LED. You can purchase battens with the LED tubes already fitted. 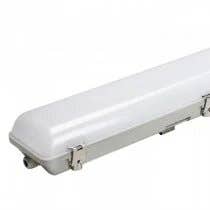 With the wide variety of LED battens available, you will find several benefits including:

Are LED tubes as bright as fluorescent tubes?

Fluorescent tubes have a 360o beam angle, which means light is wasted by pointing back into the fixture or roof.

LED tubes are available in a range of brightnesses (see table above). LED tubes also direct the light downwards so no light is lost. While LEDs use less wattage, they still retain a high level of lumens (brightness).

No. LED tubes contain drivers—electrical devices that regulate the power to the LED bulb.

Drivers are much more efficient and safer than a starter or ballast. LED drivers protect the LEDs from fluctuations in voltage and current.

How to remove ballast for LED tubes

How to replace fluorescent tubes with LED

Replacing fluorescent tubes with LED is relatively straightforward, so long as you understand electrics.

How do I assemble an LED tube light?

LED tube lights don’t need an assembly. Simply remove from the packaging and place in the appropriate frame. If you are replacing your fluorescent tubes, follow manufacturer instructions or hire a professional. See above for our brief step-by-step.

LED tube lights are both safer for the environment and humans alike.

LED tube lights are A+ energy saving rating, meaning it’s better for the environment. Unlike their fluorescent counterparts, LED tubes contain no toxic chemicals that are bad for humans and the environment. Studies have

Are LED tubes as bright as fluorescent?

LED light dedicated almost all its energy into creating light, with just a few percentages lost to heat. Fluorescent can lose up to 50% of its energy to heat production. This means that fluorescent requires a higher wattage in order to be as bright as an LED.

For example: A 24 watt LED light produces the same amount of light as a 70 watt fluorescent.

This is why the term lumens has gotten more popular - we simply cannot look at a wattages as a way to measure to brightness.

We stock LED tubes with a frosted design.

If working properly, no.

LED tubes switch on instantly, unlike fluorescent lights which utilise a starter. So long as you have a continuous current coming from the mains, your LED tubes will not flicker. If your LED tubes does flicker, it is due to a fault in the system and will need to be investigated.